Inside a bee hive – What everyone’s roles are. 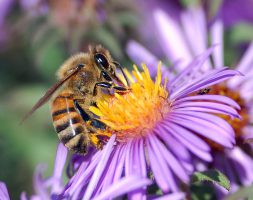 It is always important to do your homework on any particular hobby before just divulging yourself into it.

With beekeeping it’s even more important to know what you are looking at when opening up a hive. Honeybees can tell you so much about what’s going on, if you only know what you’re looking for.

A beekeeper’s goal is ultimately to keep the hive alive. In order to do so, you should know what kind of bee is in the hive and their purpose. In any hive, you have a “queen” who lays the eggs, a “drone” (the male honey bee) and the “workers.”

Not every bee is the same size, for example, a drone is not the same size as a worker bee. Each bee plays an important role and in this case some of them wear more than one hat to get the job done.

What is the queen bee’s job?

The basics of a queen bee’s job is to lay eggs. This is ultimately her entire life and she can lay up to 2,000 eggs a day! However, she isn’t able to feed, groom or take care of herself outside of this job. Those other tasks are assigned to the workers who tend to her and take care of her.

Do queen bee’s sting? The queen bee does have a stinger, however, she will mostly use it as a rivalry when she first emerges to compete with any other “new” queens since there can only be one queen bee for each hive.

What do queen bee’s look like? The queen bee is bigger than all the others. She has an enlarged abdomen, her black and yellow stripes aren’t as prominent like all the other bee’s.

Even though her whole life revolves around laying eggs all day, she produces pheromones that directs all the other bee’s. Without her the hive wouldn’t exist. She is the mother to every single bee in the hive. Her role in the hive is very important.

What do worker bee’s do in the hive? 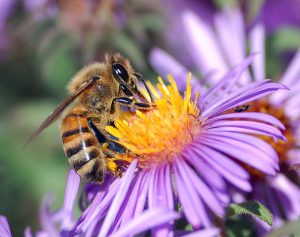 Worker bee’s are the bread and butter of the hive. These little bee’s are all female and are the smallest compare to the queen and the drones.

Workers play many different roles in their short life span. At first, they start out as “nurse bee’s” taking care of the larva and making sure they are fed. Or they may take care of the queen, feeding and grooming her.

Skipping ahead a few weeks as an example, those same bee’s who started out as nurse bee’s later become “foragers.” At this stage of their short lives they fly out in search for pollen and nectar. This is the most dangerous stage of the worker’s lives due to so much can happen in their quest for food.

However, the worker honey bee’s are the most productive out of the entire hive. These girls do everything else to make sure the hive stays alive.

Many other tasks range from: cleaning cells, capping brood, feeding larva, creating wax, guarding the hive, searching for food, etc. The list goes on and on.

It is a great social structure that goes on in a beehive. Every worker sticks together and gets the job done. To answer the question, what do worker bee’s do in the hive? The answer would be everything.

What do drones do?

Usually when I speak with others who are very curious about beekeeping, or even those who are not as interested but I spew information at them anyway, they always manage to think every honeybee they come in contact with is male. This is routinely the first area I cover to correct them.

The male species of the honeybees is called a drone. They are bigger in size compared to a worker but also smaller than the queen. Even their eyes are bigger than a worker bee or a queen bee.

Drones are also sting less, that’s right, not every bee in the hive has a stinger. So, what do drones do if the workers do everything else? The purpose of a drone is to mate with the queen and afterwards it dies. Even though a drones purpose seems small, it is still an important role to ensure their success.

Bees life cycle – how long does everyone live?

A bee’s life cycle is different depending on which bee you are referring to. So how long does everyone live? A typical worker bee will live up to 4 to 6 weeks in the summer. These girls work themselves to death. In the fall and winter, they can live a while longer since foraging for food isn’t an option.

The queen bee will live up to 2 to 3 years depending on a variety of factors. And a drone can live up to 21 days, however, keep in mind as I had mentioned they will die after mating. Also, drone bee’s are “kicked out” of the hive when the weather is cold to save on the storage of food.

On the scale of tasks needed to be done, it is by no means equal for everyone in the hive. Nonetheless, there aren’t any complaints or fights about who does what.

Every worker puts forth as much effort as they possibly can. They have to in order to survive, it isn’t an option for them. You won’t find one worker bee out of the other thousands just sitting around so someone else can do the job. It’s really quite inspiring.

I have only covered the basics of what each one does. There is so much more involved with a bee hive. The great thing about being a beekeeper is learning each role or the details that one worker bee will go through in her life. I recommend to anyone who decides to become a beekeeper to do their research.

Learning how to keep honeybees alive can be very rewarding. For myself, it feels like an accomplishment as well. An excellent hobby and a great topic to learn about.

14 comments on “Inside a bee hive – What everyone’s roles are.”

Insects are fascinating! One thing that is especially remarkable about hive insects such as bees and ants is that everything they do is just innate in them. They don’t have to receive orders, they don’t have to plan and divide tasks, it just happens. They just do it. It makes me wonder how it happens because I just can’t imagine such a complex system working without any central “brain to direct it. Bee’s are certainly amazing.

I couldn’t agree more! How their social structure works and how they manage the hive is what initially drew me to them. Now I’m completely hooked. The honey they produce is just a perk compared to what I’ve learned about them!

I always dreamed of having beehives someday….i am in love with bees on so many levels. It is said they originate from Venus, by certain schools of thought, and that they are a higher form of consciousness in some aspects. I believe that. How feasible do you think it is to have beehives on a rooftop in the city, can bees find enough food in that environment? And what do you do with hives during the winter, especially if it’s really cold?

That’s very interesting what you said about where bees originated from! And to answer your question, yes honeybees can find enough food by living on a rooftop. Honeybees will travel within a 2 to 3 mile radius to forage for food. Also, during the winter, you will want to leave the bees alone. There are things you can do to ensure they have enough food during the fall going into winter. But after that you won’t see them until spring. It isn’t the cold that will kill bees, it’s the moisture. You will want to make sure the hive has adequate ventilation in the fall as well. Thank you for the questions!

This is insightful and i must say this post is an eye opener for me, I don’t know bees has advantage in our everyday activities, I have always been finding ways curb them from my surroundings not knowing they have their benefits to human. It seems i have started having affections for them. Thanks for sharing

I am very glad to hear you have a different opinion of bees after what you’ve read. I think most people categories all bees into the nasty wasp category when really honeybees truly are beneficial.

This social structure is so interesting. There is no one complaining and everybody does it’s work. There are so many applications for us as humans.

I’m impressed with the life cycles of workers and drones, it’s so short. But still they spend their life focused on the welfare of the hive. Love it! Thanks for this post!

Hello Henry! You are so right, it’s interesting how the workers do so much with no complaints! They all have one goal to strive for! Thank you so much for the response!

Oh, thank you for opening my eyes to this beautiful creatures. I didn’t know that bees are this beautiful and they have such inmate talent. Everyone has their own job and they unite and two their own roles. This is something we humans should emulate. It’s interesting how this creatures can do so much without a brain
. Thank you for an educative post.

Hello John! I’m so glad you liked the information! Honeybees are a big obsession of mine. Thank you for your response!!

Hi Randi! – What an interesting hobby you have!  I’ve never had such an intimate explanation about bees before.  Thanks for sharing this interesting information!  As far as the cast is concerned, we could learn a thing or two from them.  I’m curious; you mentioned in your video that there is more than one drone in a hive.  How many are they usually?  After learning about the workers, I better understand the expression: “busy as a bee.”

Hello Nathaniel! Oh man, it’s a fascinating hobby! And believe it or not I find tending to bees relaxing! There aren’t nearly as many drones as there are workers and it all depends on the season. In the winter there aren’t any drones and in the summer there could be a 1000 or more depending on the hive. Thank you for your response!!

This is an interesting and enlightening topic about bee. It’s as if am in biology class. Am able to learn about the life cycle of the bees. I now understand that drone have low life span compare to the rest of the bees. I also learnt that queen bee only sting when it sight it’s competitor which happened to be another queen in the hive. Just like we have a queen in a hive, do we also have a  one or more than one King in the hive?

Hello Stella, I’m glad you found it interesting. There’s so much more that goes into a hive. The workers are the ones with the lower life span. The drones don’t really do anything. I hope that it continues to be a fascinating topic for you. It sure is for me! 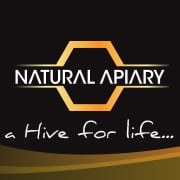